Dispatches from battles of the bag (updated)

I’ve been meaning for some time now to do an update on the ongoing fight over plastic bags.  It is, forgive the pun, a mixed bag. 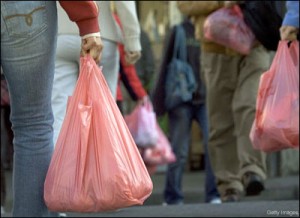 On the plus side: the suburban D.C. area of Montgomery County, Maryland, passed a five cent fee on all single-use grocery bags — paper and plastic. To my mind, this is the ideal approach to the problem of single-use bags; unlike a flat-out ban, it can be powerful way to raise people’s consciousness about the true costs of these throwaway freebies. And fees are effective in reducing single-bag use. The nickel fee on plastic bags in D.C. has reduced use of the bags by 80 percent since it went into effect last year, while also raising $2.75 million in funds dedicated to cleaning up the Anacosta River. That’s now 20 U.S. communities with bag measures in place.

Update: The Long Beach, CA City Council has unanimously passed a ban on plastic bags and a ten-cent fee for paper bags. The law will go  into effect August 1, a month after a similar law goes into effect in the unincorporated parts of Los Angeles County. The move is an example of how local communities are taking action on bags, having lost the fight for a statewide ban on bags last year in the wake of an intensive ad campaign and lobbying by bag-makers and the American Chemistry Council.

On the could-be-plus side: The California Supreme Court this week heard arguments in a lawsuit that may dramatically affect local communities’ ability to ban or restrict plastic and/or paper single-use bags. At issue is the question of whether communities have to conduct expensive environmental impact reports before enacting bag laws.

A group of bag manufacturers, the Save the Plastic Bag Coalition, contend state law requires the environmental reviews. Citing the law, the group has used lawsuits and the threat of lawsuit to block communities from passing various bag measures, arguing that  bans lead to greater use of paper bags, with attendant environmental impacts.  The case before the Supreme Court focuses on whether the small Los Angeles suburb, Manhattan Beach, should have done an environmental review before banning plastic bags in 2009.  Two lower courts sided with the bag makers (though one dissenting appeals court judge argued that making a town of 33,000 conduct a review, stretched state environmental law  “to an absurdity.”)

Yet, accounts of the hour-long Supreme Court hearing suggest the whole case may be resolved on the basis of a technicality — that the bag-makers don’t have standing to sue. The Court is expected to pass down its decision sometime this summer. 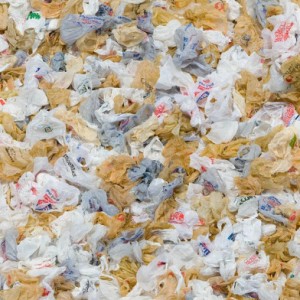 On the down side: it looks like Oregon’s bid to be the first state to ban plastic bags has stalled out. The proposed ban on plastic and fee on paper bags is apparently one vote short of getting out of committee purgatory. And that needed vote is apparently nowhere in sight, according to a recent report in the Eugene Register-Guard. Watching the fight unfold in Oregon, has been like watching a replay of last year’s battle over a similar California proposal. (Figures for the amount of money plastics lobbyists have spent fighting the ban are not yet available from the state’s ethics commission.) In California, the fight to defeat the proposed ban was led by the American Chemistry Council (ACC).  In Oregon, Hilex Poly, one of the largest bag makers in the U.S., is leading the charge, but it’s following the same playbook the ACC employed so successfully in California and which I described in Plastic: A Toxic Love Story.

What are the key elements of that strategy?

1. Trivialize the issue. On its website, Bag the Ban Oregon, Hilex argues that  “Salem legislators have more important things to do than ban plastic shopping bags and raise taxes on Oregon shoppers.” In these hard economic times, with the state facing a deficit,  that’s an argument that plays well to legislators.

2. Frame the fee as a regressive tax. No one is required to buy a single-use bag, yet calling it a “tax” makes it sound like a mandatory charge– which never goes over well with voters or lawmakers.

3. Narrow the options. First, the plastics industry worked to keep the debate focused on the relative merits of plastic versus paper single-use bags  — a falsely limited set of choices, but one which favors plastic bags, since they have many eco-pluses over paper bags. But the tactic doesn’t work with measures, like Oregon’s, which cover both paper and plastic bags. So now, the industry is trying to discredit reusable bags. The Bag the Ban Oregon website carries this alarming headline:  “What’s in your reusable bag? Lead, cadmium, salmonella, E. coli. And that’s not all.” It’s true that some reusable bags from China have been found to contain heavy metals and lead, and that unwashed bags can harbor food-borne bacteria. But it’s not as if the only choice is either toxic, contaminated reusable bags or clean, sanitary disposable bags. There are plenty of  reusable bags that don’t contain lead or cadmium, and regular washing with soap and water will banish bacteria. 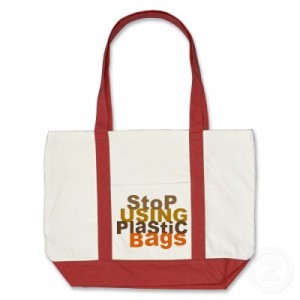 4. Push recycling, which one ACC strategist described to me as the ultimate “guilt eraser.” “As soon as [people] recycle your product, they feel better about it,” he explained. Recycling seemed especially attractive to Oregon legislators who acknowledged the problem of plastic pollution, but were loathe to enact a ban. As one senator reportedly testified: “We are a resolute state that loves to recycle…I would prefer that we recycle (plastics) and do an education system on recycling.”  These ban opponents were apparently unmoved by statistics from the Oregon Department of Environmental  Quality showing that even in this recycling-loving state, only about 11 percent of bags or plastic film are currently being recycled.

This entry was posted in Packaging, Plastics Policy. Bookmark the permalink.