There’s a great piece by Nicola Twilley at Atlantic.com on the rise of the disposable coffee cup lid, and the astonishing variety of ways in which designers have responded to the challenge of capping a portable hot cup of joe. 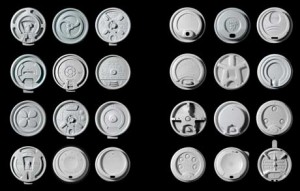 Take-out beverage lids collected in the '90s and early '00s, photographed by sarcoptiform

“As early as 1995,” she write, ” design historian and author Phil Patton’s personal collection of over 30 lid types underwent categorization and analysis in a feature article for I.D. Magazine. Under the headline “Top This,” Patton noted that Americans get through about a billion and a half plastic lids each year, and marveled at “how many varieties there were, how various and intricate the device is and how intensely designed they are.”

The first drink-through lid patent goes back to 1934, but it was designed for cold beverages.  The first vented plastic lid was patented in 1967, which makes sense historically since this was a period when the plastic industry was looking everywhere for potential markets for disposable goods. But it wasn’t until the 80s, that designers really went to work on creating lids that could truly accommodate the demands of drinking hot liquids while walking, driving or commuting. It’s probably not a coincidence that this is also when bottled water began to take hold.

But the heyday of disposable cups may be waning, Twilley notes: ” Last year, Starbucks partnered with Core 77 and others to run the Betacup Challenge, a crowd-sourced design contest to reduce to-go cup waste. The winner — Karma Cup …wasn’t even an actual cup. Instead, the Betacup Challenge incentivized the use of reusable cups by creating a chart of customers who used one, and giving away for free every tenth drink ordered in one. If the idea takes off, maybe one day the disposable plastic lid will be collected for its rarity value, rather than its everyday charms.”

And wouldn’t that be great.