In the old days — say, four years ago — bag battles  were centered on the plastic or paper question. Which was always something of a red herring since the issue at stake is really our dependence on single-use products made of any materials, our habit of using finite natural resources for trivial uses, like carting groceries from the the store to the front door. But over the past year or two, bag activists have been increasingly successful at reframing the issue as disposability versus resusability. And not surprisingly, the industry has stepped up its efforts to discredit resusable bags. Now that effort is taking a new and nasty twist.

Three of the country’s biggest bag makers have sued Chico Bag, a small California firm that makes reusable bags, accusing the company of causing them “irreparable injury,” according to a story in the San Francisco Chronicle. The suit reportedly accuses Chico of using false or misleading information on its website and in its marketing materials in a deliberate effort to “misappropriate customers and potential customers.” 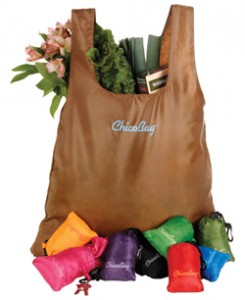 Chico Bag founder Andy Keller has acknowledged posting some inaccurate information, including statistics from an out-dated EPA website, but also has said he took them down once informed the facts were wrong. He told the Chronicle he considered the suit an attempt to squelch his company — and silence the bag-ban activism he has supported since founding Chico Bag six years ago. For instance, Keller created a costume, the “Bag Monster,”  a shaggy suit made of 500 plastic bags, which he says is the number of bags the average American shopper uses in a year. Though Keller trademarked the costume, he has lent it out freely in support of bag ban activities. 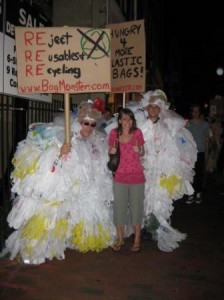 Keller sees the suit against his company as a strike against bag activism in general. “The plastic bag is under attack all around the world,” Keller told the Chronicle. “I think the plastics industry doesn’t know what to do, and they’re scared, in my opinion.”

The bag companies told the newspaper the suit isn’t about politics, but about truth in advertising . “It’s not fair for any company to go around and publish any false or misleading marketing materials,” said Philip Rozenski, the director of marketing and sustainability for Hilex Poly Co., one of the plaintiffs, along with  Superbag Operating Co. and Advance Polybag. (Hilex, incidentally, has been leading the charge to quash an Oregon proposal to ban plastic bags and put a fee on paper ones.)

The companies reportedly want to block Chico Bags from publicly blaming disposable bags for environmental problems or claiming its reusable bags are environmentally superior. It’s true that all bags carry environmental impacts and that the significance of those impacts vary depending on what you’re measuring and your end goals (eg paper bags require more energy and water to produce and are responsible for more greenhosue gas emissions than plastic ones.) But given the wealth of facts pointing to the environmental impacts of plastic bags (marine debris, clogged storm drains, litter, tangled recycling equipment), it’s hard to see how that injunctive request can stick.

According to the Chronicle, the bagmakers want Chico Bags “to hand over any profit resulting from the allegedly false statements, and to pay for any damages suffered” by the companies. They are seeking punitive damages, as well. The suit doesn’t specify how much money the bag makers claim they have lost.  But fighting the suit, much less losing it, could be a heavy financial hit for a company that made only $5.5 million in revenues last year. By contrast, one bag maker told me, the American plastic bag industry generates about $1.2 billion a year.

This entry was posted in Packaging, Plastics Policy, Uncategorized. Bookmark the permalink.

One Response to A New Bag Battle