Sometimes a chair is more than a chair

This essay is adapted from my book and appeared on the Speakeasy at WSJ.com on May 7:

The Kartell store in San Francisco is a monument to plastic. The place glitters like a diamond, or rather, a cubic zirconium — with brightly colored plastic chairs and tables and tchochkes commissioned from some of the world’s star designers. Still, the salesman seemed unfazed when I entered the store, not long ago, lugging my own plastic chair, one I’d bought at Home Depot.

My chair was an example of the breed known in industry circles as the monobloc – so called because they are made from a single piece of plastic. We all know the type: plain, lightweight chairs that can be bought for the same price as a six-pack of Bud.

The monobloc is arguably the most successful piece of furniture ever invented. You can find monoblocs in porches, poolsides and parks around the world, in cafes from Bangkok to Boston. They’ve washed up in the wake of disasters such as Hurricane Katrina or the recent Japanese tsunami. There was reportedly a monobloc in Saddam Hussein’s hidey-hole and in the prison at Abu Ghraib. People rose from monoblocs in China to celebrate sixty years of Communist rule, and in Kenya to rejoice the election of Barack Obama. Monoblocs have been spotted in reclusive North Korea, where not even that icon of global commerce, Coca Cola is allowed.

Cheap and supremely functional yes, but few would consider the monobloc a masterpiece of design. Indeed, some towns have judged the chairs so irredeemably tacky they’ve banned them from public spaces. Yet, like the chairs surrounding me at Kartell, my humble white monobloc is descended from the mid-twentieth century quest to use plastic as a medium of great design.

When plastics began appearing after World War II, the design world was enthralled. Plastics were, as one critic later wrote, an “answer to an artist’s dream” – “materials that can be made to assume virtually any size, shape, form or color the mind of man may conceive.” What’s more they were amenable to mass manufacture, offering designers a chance to fulfill their democratic goals: in the words of Charles Eames: “to get the most of the best to the most for the least.”

One after another, the era’s great designers tried to fashion an all-plastic one-piece chair that could be mass manufactured. Eames, Saarinen, Zanuso, Colombo – each took on the challenge. Each came away disappointed, stymied by the technical challenge of molding in a single shot the back, seat arms and four legs. Then in 1967, Danish designer Verner Panton resolved the technological stalemate with a radical new kind of chair. There were no arms or legs to complicate the production process. Instead it was just a long S-curve echoing the silhouette of someone seated. The Panton was all sinuous line and glossy surface, a sexy, exuberant double twist of plastic. 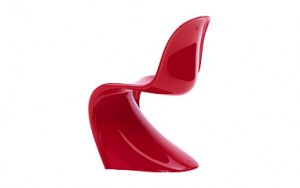 Though never wildly commercially successful, Panton’s chair came to be considered a Pop Art icon. And in its wake, other designers began dreaming up their own one-piece plastic chairs – wild creations that were inflatable or looked like sea urchins or molars. As processing and molding technology improved, designers began riffing plastic variations on traditional four-legged chairs.

It was only a matter of time, of course, before some enterprising entrepreneur saw an opportunity for a wholly new mass market – one predicated on low-priced raw plastics and the most utilitarian and economical of designs. Monoblocs started appearing sometime in the late 1970s or early 1980s; the originator remains unknown. Soon there were factories turning out as many as 50,000 a day. Talk about democratic.

I’d brought my own monobloc to Kartell that day to see how it stacked up against the company’s pedigreed plastic chairs. I placed it next to a Philippe Starck creation, a chair he dubbed the “Louis Ghost.” Made of a hard, glass-like plastic, it’s a beautiful gracefully proportioned chair that hearkens to some unspecified period in French history. Playful, yet elegant, solid, yet ethereal, the Louis Ghost has been featured in design magazines worldwide, in settings both modern and traditional. It’s one of Kartell’s best-selling pieces.

I took a few turns sitting in each of the chairs. The Louis Ghost was roomier and felt sturdier than my monobloc, but also more slippery. Truthfully, neither one was a chair in which I’d want to spend a lot of time. I prefer chairs made of wood.

“It could be said that when we design a chair, we make a society and city in miniature,” the British architect Peter Smithson has written. I looked at the monobloc and the Louis Ghost trying to imagine the societies they evoke. One conjured a realm of dazzling possibility; the other a land of low-cost utility. In the plastic world we inhabit, there’s a place for both.

This entry was posted in Business of Plastics, Uncategorized. Bookmark the permalink.