News from the South Pacific

Earlier this week I spoke by satellite phone with Marcus Eriksen and Anna Cummins, co-founders of 5 Gyres, an organization created to do research and public education on the problem of plastic pollution. By now, the “garbage patch” in the north Pacific gyre is pretty well known. But there are at least four other ocean gyres where plastic debris can  accumulate and concentrate and very little is known about them. 5 Gyres was set up to research them all. Over the past year, Eriksen and Cummins have journeyed to the gyres in the north Atlantic, the south Atlantic, and Indian Oceans. When I spoke to them they were making their way toward the center of the south Pacific gyre.

Q: Where are you at this point? 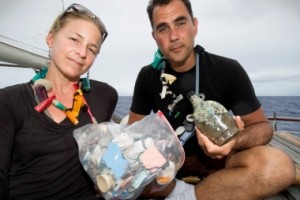 Q: What are you seeing from the boat now?

Marcus: Right now the sun might set in about three hours. It’s 360 all around water and the water is blue, blue, blue and maybe 4,000 feet deep right here. It’s beautiful.

Q: What are you finding out there?

Marcus: So far very little, compared to other gyres. Anything is of course significant. We are finding plastic and the concentrations are growing as we approach the center of the accumulation zone. But it’s been very little compared to the north Pacific, the north Atlantic, the south Atlantic and Indian Ocean

Q: Why do you think that is?

Marcus: One reason is the coastal outputs are less. For example, in South America, you’ve got the Andes Mountains that border the western edge of the continent so the watersheds are rather small and the Chilean coast is rather unpopulated. There’s not as much in the coastline as there is, perhaps as in east Asia or the east and west coast of North America, around India and the Indian Ocean. And if you look in this region in the south Pacific gyre, there are islands everywhere. The islands act as natural nets for plastic. So any plastic leaving the islands in the Pacific or New Zealand and Australia is going to have to navigate through hundreds of islands before it gets to the south Pacific gyre. But there’s still plastic here, right where we thought we’d find it — right in the center of the gyre.

Anna: I wanted to add one more point. Another reason you may have less plastic in this particular gyre is you don’t have as many heavy consumer nations bordering this ocean. In the north Pacific where we find the most, we’ve got Pacific rim countries, north America, Mexico, Asia that are most likely higher producers and consumers of plastic goods.

Q: Why did you expect to find more plastic in the center of the gyre?

Anna: What we’ve been doing on these research voyages is following a current modeling study produced by Nikolai Maximenko from the University of Hawaii.  He’s done a trajectory looking at what happens when drifters [special buoys] are released and where the highest concentration would end up. He’s found that tends to be in the center of these gyres where the winds will shut down and the currents spin everything toward the center. In the south Pacific what’s interesting is it’s predicted that debris won’t escape the way it does from other gyres. The four other gyres will tend to spit debris back out onto the shorelines and islands over a period of years, whereas in the south Pacific it tends to stay concentrated. So we went into this voyage thinking that we either would find more because of that phenomenon, or we’d find less because there aren’t as many consuming nations that are inputting debris into this gyre. So far we’ve seen less.

Q: What are you seeing?

Anna: Tiny little fragments. We’ve only seen four or five pieces of macro debris. We pulled up one buoy the other day that was heavily fouled, covered with a long chain of barnacles. We saw one fishing crate and something that looked like crates just under the surface of the ocean. But we’re not seeing much micro debris either. Today, for example, we pulled in what looked like our most dense sample thus far. And it was roughly 50 small fragments of plastic that we found over a ten-hour trawl, over roughly 50 miles.

Q: This is the fifth gyre you’ve been in. Do you see differences in the type of stuff that’s accumulating?

Marcus: Each of the gyres is to a certain degree defined by the fishing activities and the coastal outputs of trash. For example, in the north Pacific, you’ve got a lot of fishing industry from Asia that contributes plastic to the gyre. Then you’ve got lots of consumer products from Japan and China like cigarette lighters and toothbrushes. But fishing gear dominates. You get to the Sargasso sea and sail from Bermuda to the Azores and you find lots of consumer products –bottle caps, shaving razors, things of that sort. Also lots of fragments of buckets and crates and lots of plastic sheeting. But most of the plastic sheeting actually occurred in the Indian Ocean. The Indian Ocean was the plastic bag gyre – we found lots of plastic film in samples there. The south Atlantic was really kind of homogenous with small, little plastic particles in every single trawl. And that’s the same thing we’re finding here in this gyre, that confetti of plastic particulate. It’s hard to source where it came from.

Q: What are you hoping to accomplish?

AC: We want to show people this problem is not just confined to the north Pacific gyre, which has had a lot of media attention, but that this is actually an international problem. We find plastic pollution in all the world oceans and as such it needs to be dealt with on an international level.  There are also several unanswered questions that we’re hoping to do research on. One is the ultimate fate of micro plastics: what happens to these plastic particles?  We’ve seen from the research of Sea Education at Woods Hole that they’re not seeing a significant increase [in small fragments in the ocean] over time. So that’s a big, big mystery that has to be solved. Where is this plastic going? Is it sinking to the ocean floor? Is it being digested by organisms? Of course the other big unknown is how this stuff is affecting human health. Are pollutants from plastics winding up in the food chains and the tissues of organisms and winding up on our dinner plates? So those are two of the questions that we’d like to further research.

This entry was posted in Plastic Pollution and tagged ocean pollution, plastic. Bookmark the permalink.

One Response to News from the South Pacific