Maybe Pepsi has the real thing

In my book I write about Coca Cola’s quest to create a more sustainable plastic bottle, culminating in its introduction last year of what it calls the “PlantBottle.”  The bottle is  made of conventional PET plastic, but about a third of the plastic is derived from plants — sugar cane, to be precise. That gives the bottle a lower carbon footprint than the typical one made from fossil fuels and it can still be conventionally recycled. Coke said eventually it hopes to have a PlantBottle made entirely from plants.

Now along comes Pepsi, which apparently has done just that. Actually it’s gone one even better. The company today unveiled its “Green Bottle,” a PET container made entirely 100 percent from plants. But unlike Coke’s bottle, Pepsi isn’t using any food crops– its bottle comes from switchgrass, pine bark, corn husks and other materials, which also has the benefit of making it compostable as well as recyclable.  Ultimately, according to The Huffington Post, Pepsi plans to “also use orange peels, oat hulls, potato scraps and other leftovers from its food business” to make the bottles. Look for them starting in 2012. If we really want to make sustainable bioplastics, this is the way to go — using waste materials rather than agricultural crops. 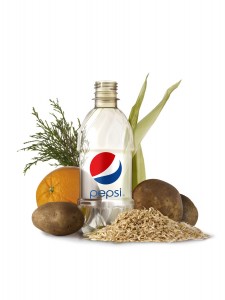 This entry was posted in New Plastics. Bookmark the permalink.