Life in the Plasticene

These extraordinary photos were taken by Chinese photographer Gangfeng Wang. This kind of unofficial recycling is a common sight in Chinese cities. But the pictures also seem to me a perfect metaphor for what it can feel like living in the age of plastic, or what some have called, the Plasticene.

A friend purchased these photos for me at a gallery in Shanghai, and the bio that came with them tells of an extraordinary life:  Wang grew up during the Cultural Revolution, worked in an orchard after graduating from high school, then was trained to play violin in a Revolutionary orchestra organized to inspire the workers at the Great Leap Forward Commune where he lived, and then he was sent to Shanghai to work as a machine repairman. He received his first camera as a gift in 1981 and, obsessed with the idea of becoming a professional photographer, set out to teach himself the basics of photography. It has been his sole focus since the mid-80s. His work has  been exhibited in galleries and museums around the world, and you can see more of his striking images of everyday life in China at his website, Gangofone. 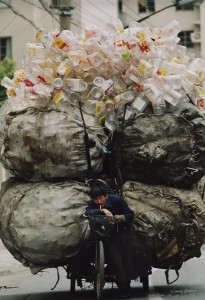